Explore videos that showcase Application Examples on our Videos page 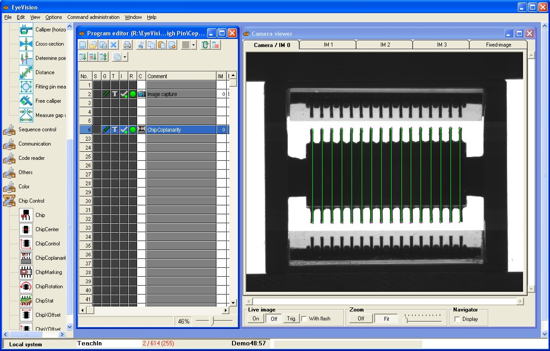 To meet the demands of automated visual inspections in the electronics assembly process, EVT has developed the “ChipControl“ command set for its EyeVision software.

There are various applications for the command set for quality inspection in the electronic and automotive industries: detection of bent contacts or leads; the presence of the chip housing; inspection of the coplanarity; recognition of the pin-one marker; orientation and position adjustment; the pin gap, etc.

In combination with the ChipEye 5-Side, electronic components can be captured from five sides and evaluated by EyeVision software at the same time. Good and bad parts can be separated quite easily. The 5-Side scanner is specialized for inspection of microscopically small components and covers a broad scope of applications.

ChipControl fits perfectly into the drag-and-drop programming of EyeVision software. The preprogrammed commands are displayed as icons and can be dropped into the inspection program without any programming skills. Additionally, EyeVision software is modularly expandable, which means that all the commands can be added in a later stage, without purchasing a new license.

These days “Image Processing” is a topic in many industries and it is de rigueur in industrial applications. Hardly a production line can manage without industrial camera and evaluation software such as EyeVision. This also the case with Agribusiness.

One example is the counting of eggs on a conveyor belt. In modern chicken houses to handle this, camera-based systems are installed.

The difficulty here is, that the eggs on the conveyor belt are not in any order and sometimes are touching each other and sometimes not. In this current case the eggs on the image captured by an industrial camera, have to be separated not only from each other – egg between egg – but also from the background. Only then an accurate counting of objects can be guaranteed. 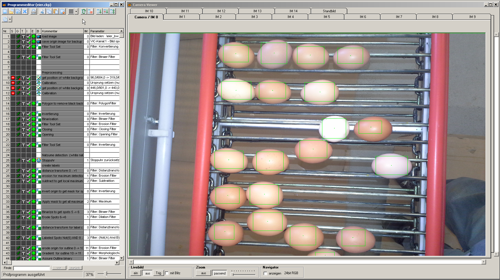 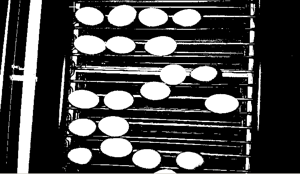 For this the EyeVision uses a series of filters, which allows it to separate and count the eggs under these conditions. Due to the intuitive drag-and-drop programming of the EyeVision software, these filters are easily applied and can be used in other cases, where other similar objects have to be counted.

But before that, there is the question of a suitable illumination or respectively an image, which is high in contrast. Additionally the shadow of the eggs should be as little as possible, as the separation of the eggs from the background and from each other can become blurred. A strong contour is essential to count objects.

For illumination e.g. a back light can be considered. This will have the result, that the eggs appear dark against a bright background. Alternatively the eggs can be illuminated from above with a strong incident light, which will show the eggs bright on a dark background. In both cases a daylight shielding is recommended. 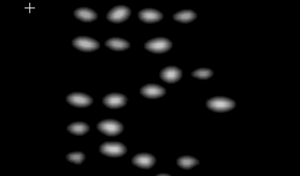 In our case, the second option was chosen – white eggs on black background – where the eggs are also separated clearly from the background. Several different filter commands are needed to separate and count the eggs, which are similar to each other in shape and color. The result are properly separated eggs, as shown in the Camera Viewer of the EyeVision software. 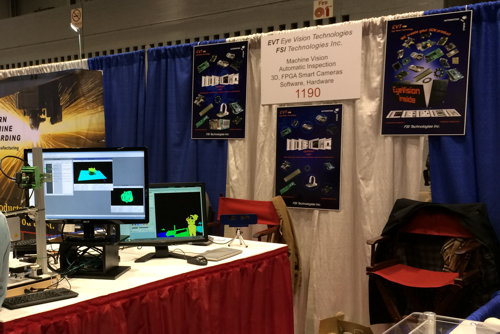 This system automatically inspects completed bearing assemblies to ensure it is free from defects directly related to final assembly – defects such as:

They FyrEye-4003 family of systems inspects assembled circuit boards to ensure the correct components are in the proper locations. It offers the benefits of automated inspection (24/7 operation) and can result in reduced labor costs. Example inspection functions include verifying:

The FyrEye-4003 is a family of systems, customized to your application and requirements. Your particular model will be from the same family, but will have different variations in equipment and capabilities. For more information about the FyrEye-4003 visit http://www.fsinet.com/circuit-board-componentassembly-inspection-systems.htm. 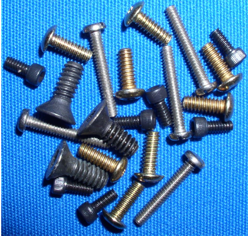 The FyrEye-3210 systems provides automatic inspection for threaded products such as fasteners, bolts, screws, nuts, threaded rods and more. FSI can provide accurate inspection/measurement of:
• Major/minor diameter
• Thread angle/pitch/length
• Number of threads
• Completeness of threads
• Chips, cracks and gouges
• Edge irregularities
• Surface analysis
• Warping
The FyrEye-3210 is a family of systems, customized to your application and requirements. Your particular model will be from the same family, but will have different variations in equipment and capabilities. For more information about the FyrEye-3210 visit http://www.fsinet.com/thread-analysis-inspection.htm 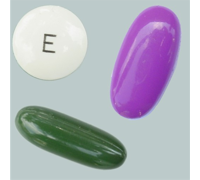 FyrEye-3600 systems are designed to inspect individual pills and tablets. FyrEye-3600 units are available for both slat conveyor and linear production/inspection machine configurations. These systems can inspect, verify and acquire data related to the following defects/conditions/attributes:

We’ve improved the Machine Vision side of the FSI website and are sure you’ll be pleased with the results. On the newly designed Machine Vision Home Page, you’ll find information about FSI’s products and services including hardware and software, solutions and complete systems, research, engineering and training. We’ve added more detailed spec sheets on our application specific systems. You’ll find additional downloads, data sheets and brochures on the Downloads page. You can check out the component options available in machine vision Lighting, Lenses and Cameras. Finally, there is even an expanded section of the site dedicated to NeuroCheck Software. This includes detailed case studies and Service Pack downloads from years past. Spend some time browsing this side of the FSI website (http://fsinet.com/MV-Home.htm), you’ll be glad you did!

The FyrEye-5600 has successfully inspected a range of caps and closures for defects prior to installation on the product. This system can assist in finding defects on cap threads, seal inserts, perforations, molding and dimensional attributes. For more information on the FyreEye-5600, Click her: www.fsinet.com