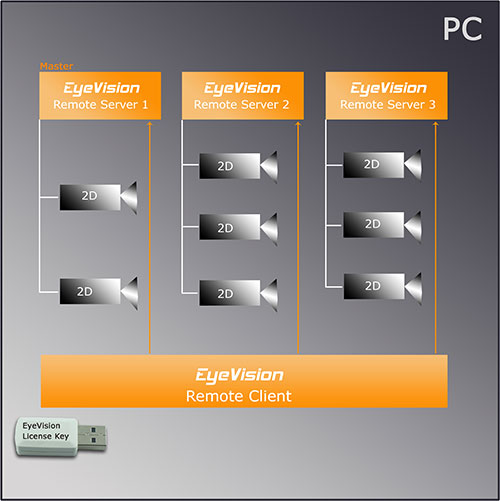 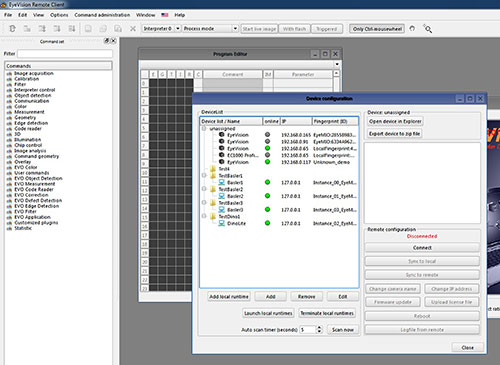 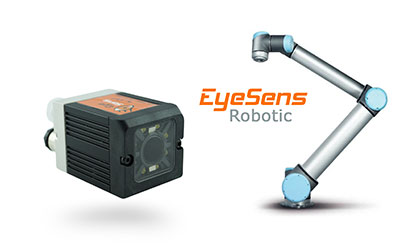 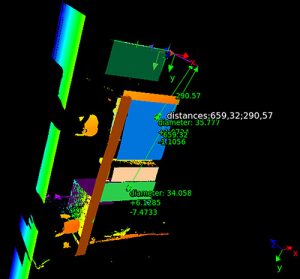 The measurement of holes and the determination of their position is a special challenge. EyeVision 3D software offers precise 3D measurements with more than 40 specialized commands. 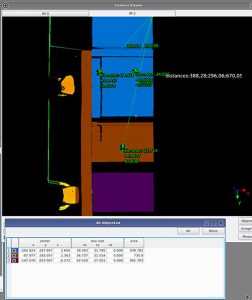 In the case of sheet metal components, it is possible to capture the whole component geometry in a high-resolution point cloud by using visual 3D metrology. A precise metrology command set allows correctly defining various measurements in a point cloud and their coordinates in relation to other results with only a few commands.
Typical characteristics such as hole patterns, cut/trimming, and resilience on edge laps of car bodies can also be measured exactly.

For the inspection of weld seams, as well as adhesive beads, EyeVision 3D software uses the ProfileMatch command. Just a simple parametrization allows the evaluation of profiles and issues an analysis of the detected defect. A detailed protocol for all measurement results can be issued with just a few mouse clicks.

With the complete command set of EyeVision software it is possible to configure the application with 2D cameras and 3D sensors. For example, the point cloud can be displayed as 2½D image, and read an embossed or engraved lettering with a 2D OCR module. This is useful when reading DOT code on a tire or stamped numbers in metal.

More 3D sensors which will be supported by EyeVision 3D are about to follow.

EyeVision software from EVT now offers EyeMeasureEasy (EME), an intuitive image analyzing tool. The user can directly measure and analyze image data with only a few mouse clicks. The tool can be used for applications in microscopy. The features of EME can be extended, so that it can be integrated into a fully automated, industrial inspection process.

With EyeMeasureEasy the user can display live-images, and can save images and load them from memory. There are several different measurement options that can be carried out on those images, such as: 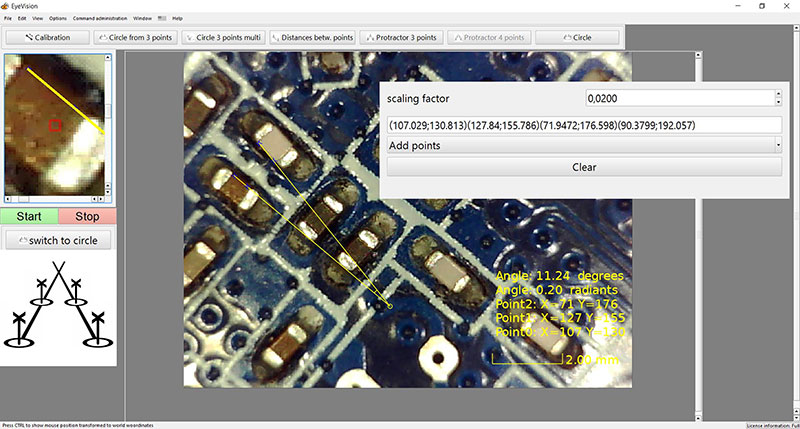 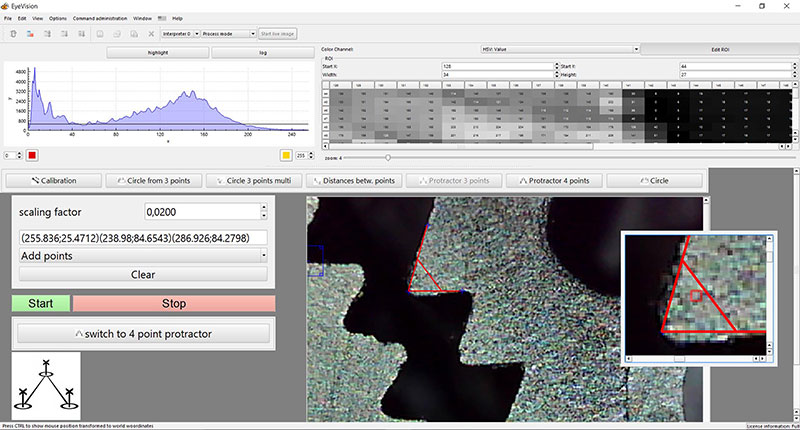 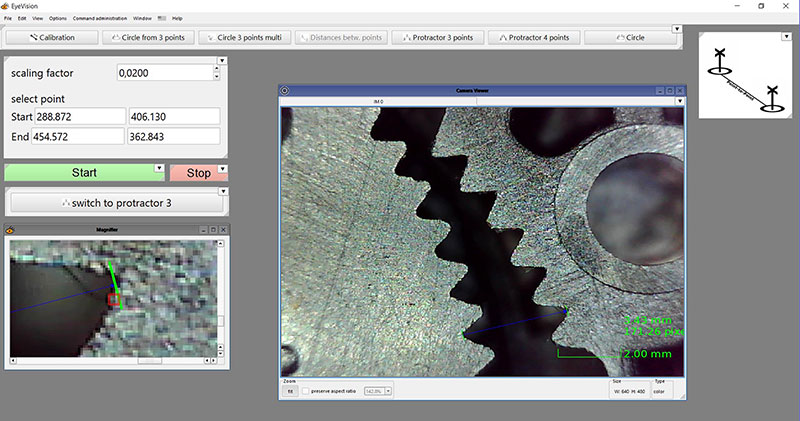 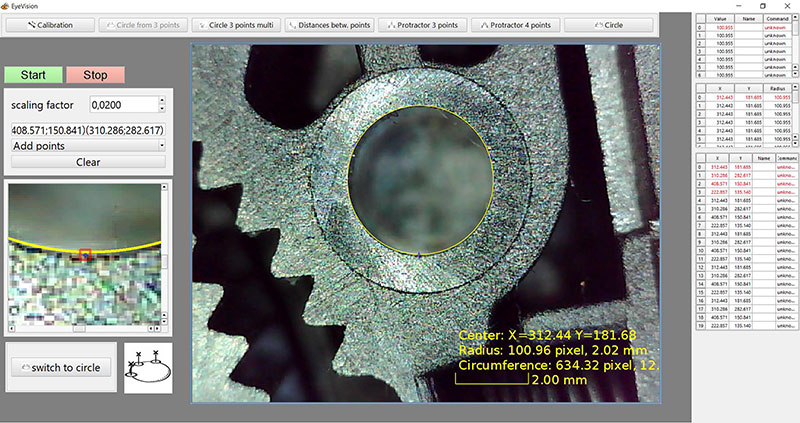 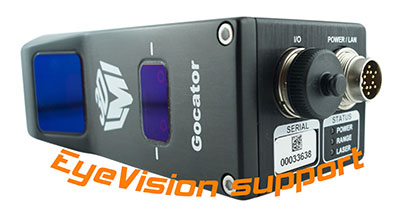 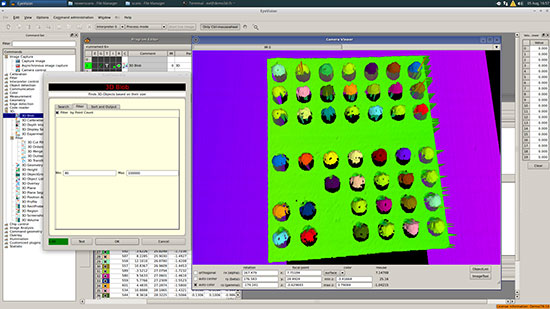 The EyeScan AT 3D sensor – together with EyeVision image processing software can inspect the correct position of pins and check for the quality and position of balls on a Ball-Grid-Array. The connectors of BGAs can be inspected with the 3D sensor for various characteristics up to an accuracy of a micrometer (µm).

Thanks to the Scheimpflug-projection, the laser line stays focused and distortion-free. Even in a high-speed application, the captured images have a high resolution, and no lens distortion correction is needed. Every single bump of the BGA is inspected for its size and shape up to a µm-accuracy.

The EyeScan AT utilizes precision laser line measurement (or laser triangulation). The camera views a laser line, which is projected onto the component (in this case: the BGA) and calculates the height information from the laser line profile.

Utilizing a precision blue laser and on board FPGA the EyeScan AT 3D is capable of over 20,000 profiles per second with very high resolution to capture even the finest details. Additionally, the High Dynamic Range algorithm with threefold exposure allows inspection of bright and dark objects in the same scan without loss of speed.

3D image information is processed by the powerful EyeVision software which is programmed though an intuitive drag and drop interface.

We will provide you with the EyeVision Software and the TeamViewer Meeting ID before the Training. 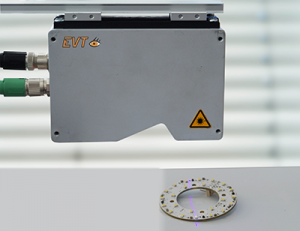 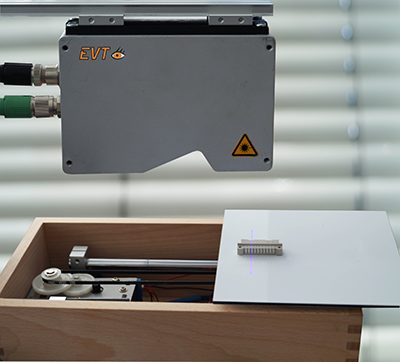 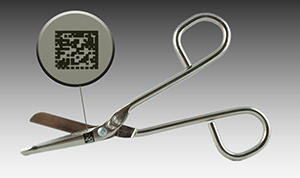 Medical products undergo a number of quality and safety inspections and have explicit markings and identification. EyeVision image processing software is often used to inspect markings on medical products. A camera inspection system consisting of an EyeCheck smart camera, which includes EyeVision software, can be integrated permanently into the laser marker head, ensuring an accompanying image capture for verification and validation of the quality.

EyeVision software can read markings such as:

EyeVision software inspects the markings, ensuring consistent quality. Also, the contents of the codes can be inspected. The software includes commands for code reading as well as pattern matching, position, and measurement technology. This is especially important as the code is used for the product identification, traceability, product safety and quality.

The EyeCheck smart cameras are available in various variations and can be equipped according the production process and production line, with diverse sensors and lenses. All EyeCheck smart cameras have one thing in common: the EyeVision software. The software can be mastered in no time at all without special programming skills. Due to the drag-and-drop function and the self-explanatory graphical user interface, inspection programs can be created easily for reading complex codes and characters. 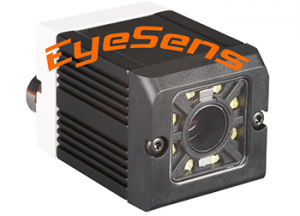 The EyeSens DMC can also be equipped with the QR-code reader command. The codes are evaluated by EyeVision image processing software. The drag-and-drop programming does not require programming skills and the code reader command is easy to adjust in the graphical user interface. The user can also design their own interface, using the process mode. 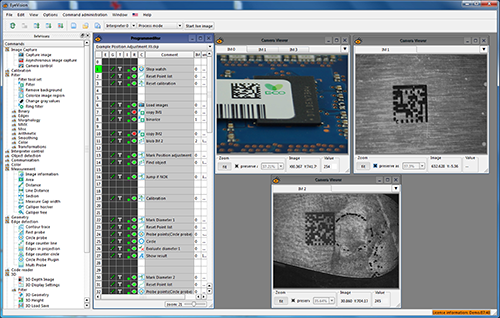