EyeVision Software can be used in a variety of applications in packaging machines. One example is packaging inspection for sanitary napkins, panty liner and incontinence products.
The products are ejected from the production machine and are inspected with an inline quality check for the correct alignment, the geometric contour and the thickness of the product.
In one case, the EyeVision system replaced an already existing system that had reached the limit of its capacity. The inspection program was developed with EyeVision software and its drag-and-drop function, in combination with a GigE camera with high fps rates. The system now can reach the required speed of inspecting 3,000 units per minute while maintaining accuracy. 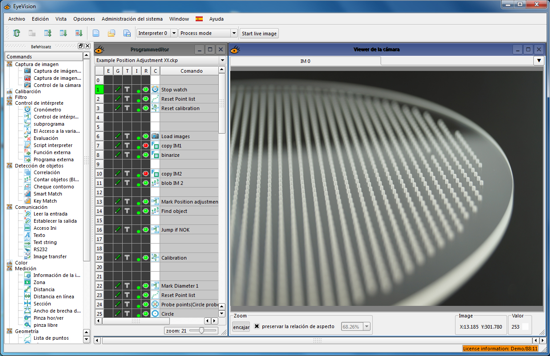 EyeVision Machine Vision software has developed a program for wafer particle inspection, especially for the semiconductor industry.
Particles are probably the most common defects in wafer production. During transport, during processing, or even in the plant itself, particles such as dust or material abrasion can settle on the wafer. This can develop into an undesirable covering and alter the processing in this area.
The particles can prevent the etching or the precipitation of layers. This can lead to malfunctions such as short-circuits or missing electrical joints between conductors. The particle inspector of EVT software analyzes the surface of the wafer for dust and other particles, using a laser line.
EyeVision software recognizes even the slightest discrepancy and can send an evaluation of the wafer as Good or Bad. EyeVision software is very easy-to-handle and the particle inspection module can be adjusted easily in the graphical user interface. 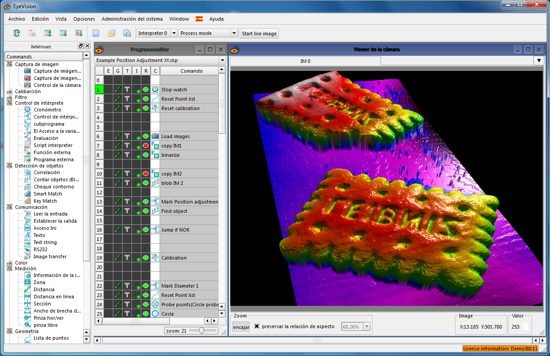 The EVT (EyeVision Technology) EyeScan AT 3D uses a three-dimensional sensor, whose data evaluation is carried out with the EyeVision image processing software. Using the 3D commands of the drag-and-drop programmable software, robot guidance becomes an easy-to-solve application.

For robot guidance, the 3D-positioning of the measuring object and its geometrical characteristics are detected. Additionally, the position discrepancy is calculated and the corrected data is forwarded to the robot system.

At the same time, the EyeScan AT 3D can inspect the surface of the objects, such as the surface texture of gingerbread cookies. During the baking process the gingerbread becomes slightly uneven and therefore has to be measured again separately one by one. The robot needs the orientation and height information for the subsequent sugar icing decoration of the pastry. For this application, the robot should position itself with the camera system above the gingerbread and then could measure and decorate the cookie.

Further application examples for the EyeScan AT 3D and EyeVision software are the adhesive bead and weld seam inspection, solar cell control, as well as tire and rubber inspection.

OCR can also be combined with 3D-surface inspection of embossed and debossed surfaces. The z-values of the 3D-inspection is recognized by the OCR-tool as lettering.

“Intelligent” sensors such as the EyeScan AT 3D are becoming increasingly relevant in industrial applications. By equipping an industrial robot with the proper sensors, the robot can carry out the task largely by itself.

The BrainLight R is a smart ring light developed by EVT. This LED illumination is easily configurable and has a RS232 connection for industrial use. With this light any combination of illumination patterns can be created. Additionally, the light not only regulates the illumination patterns, but also controls that the camera captures only one image per illumination scene.

Programmed patterns, called Frames, can be saved and can be automatically reloaded after each restart. The ring light is equipped with a RS232 or TTL UART interface and power supply of +5V or 12-24V.

There are also predefined light patterns available and the possibility to regulate the brightness of the LEDs. The ring light is divided into 8 segments, each with 3 LEDs. Each segment can be controlled individually and dimmed in its intensity.

The control for the camera is done via strobe, and a PlugIn for EyeVision software makes the illumination completely graphically programmable. 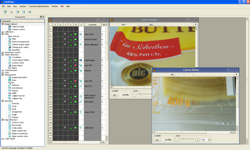 Today’s consumers are more and more aware of quality, especially when buying food or pharmaceuticals. Overall package appearance can be a big purchasing decision criterion. Sufficient inspection of the packaging reduces errors and thus increases the customer’s confidence in the product, and ultimately sales.

EyeVision software from EVT is the evaluation software behind the smart cameras and PC- based machine vision solutions. Together with hardware that supports EyeVision, such as the EyeCheck smart camera series, several inspections can be carried out to assure packaging quality.

The visual inspection not only detects errors in transparency film and heat-sealed joints, but also the correct position of printed backing film and labels. Additionally the system can check the expiration date, as well as the bar code and the print layout.

FSI Technologies is the North American partner for EVT and EyeVision software. You can visit us both at the Automate 2015 show at McCormick Place, March 23-26, to discuss your packaging quality needs or any other machine vision application.

In Addition to EtherNet/IP, the EyeSens vision sensors by EVT now also support the field bus standard Profinet IO. This allows communicate with both of the most common communication standards of industrial Ethernet.
With Profinet, it is possible to create solutions for product engineering, process automation, building automation as well as the whole spectrum of the drive and control technology or synchronous motion-control-applications.
For the EyeSens vision sensors, conformity class A (CC-A) was used. This class makes fast real time communication and control possible. All functions of the discrete Inputs and Outputs (Trigger, handshake as well as all results) can be communicated via Profinet.
The time and effort of installations are reduced considerably with Profinet, especially in big plants with numerous sensors and actuators. First, there is no need for the complex IO-cabling of every single sensor. Secondly, the network integration is configured easily via drag-and-drop-function.
The EyeSens vision sensors contain specific EyeVision commands and are available for various applications such as OCR/OCV or bar code reading, object detection, pattern matching, measurement technology, color control, etc. The compact cameras are equipped with either lens and illumination or as a C-Mount version. 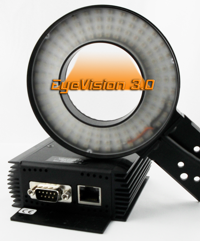 EyeVision 3.0 is programmable with the drag-and-drop function in the graphical user interface. The LATAB controller can also be integrated into the inspection program with a special icon.

with complete support of Linux, Windows and Mac OS X

The EyeVision 3.0 – the new release of the well-proven image processing software – now offers a graphical user interface (GUI) in Spanish. All commands as well as menu items and the new context help feature have been translated into Spanish. The software now allows easy creation of inspection programs in English, French, German, Japanese, Chinese, Korean, and Spanish.
The GUI of EyeVision 3.0 supports the usual operating systems: Linux, Windows and Mac OS X. Additionally, the user can easily program via the drag-and-drop function, allowing inspection programs to be created with only a few mouse clicks- no special programming skills needed.
EyeVision 3.0 supports many camera manufacturers: Matrix Vision, BASLER, XIMEA, IDS, The Imaging Source, etc. The EyeVision 3.0 user can also create a stand-alone-solution for machine vision applications such as register mark recognition, position and rotation detection, solder joint and sealing inspection, closure and status inspection, carton folding and volume control, fill level inspection, inspection of glass and plastic bottles and color recognition.
And all this now also in Spanish! 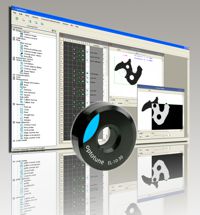 EVT presents the new EyeCheck smart camera with an electrically tunable lens by Optotune.
Flexible and fast focusing solutions with electrically tunable lenses are highly beneficial for machine vision applications such as quality control, packet sorting, bar code reading, etc. In traditional setups, the adjustment for objects at different working distances is realized mechanically. With the shape changing polymer lenses, refocusing can be achieved in milliseconds without any mechanical translation involved, enabling compact, robust and dust free optical systems.
EyeVision 3.0 also supports the Optotune lenses and is therefore suitable for fast changing applications. The software even offers an extra command in the graphical user interface. With the new plug-in the user is able to create commands and insert them in the EyeVision GUI.
This new feature of EyeVision 3.0 software offers the user advantages such as time savings, higher accuracy and a compact visual system.